First half: St. Joseph’s were a good team and did some great tackles. It took a while but some great passes resulted in a well worked team goal scored by Ryan. Ethan and Daniel made some good clears from in front of the goal. Goalie, Michael made some great saves and at the end of the half it was 1-0.

Second half: Jack ran and ran, he took on the whole field and put the ball into the near-post top corner. After, Jack scored a great headed goal in the bottom corner. Some more excellent passing and team work resulted in another goal scored by Jack for his hat-trick! Will had some very near misses and Kaylem was great in defence. Soon Jack scored his 4th goal! Finally, Will topped it off with the sixth goal off the game. It ended and St. Cuthbert’s won 6-0. 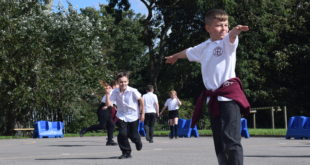 Year 5 were all absolutely amazing this week. Happy smiles all round and, despite some …